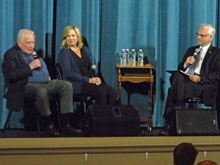 From left: Clint HIll and Lisa McCubbin with Joe Calvaruso, '78.Michigan is understandably proud of Gerald R. Ford, but on October 4 Albion got a better understanding of the importance of Betty Ford. Lisa McCubbin, author of a 2018 biography of the former first lady, along with former Secret Service agent Clint Hill, who served under five presidents and wrote three best-selling memoirs with McCubbin, shared historical facts and personal insights during Albion College's Joseph & Donna Calvaruso Speaker Series event at the Bohm Theatre.

A "Washington wife" for more than 20 years, Betty was anticipating then House Minority Leader Ford's retirement when he suddenly became vice president in December 1973, and then president in August 1974. "She often said the day Ford was inaugurated was the saddest day of her life," McCubbin said, noting that Betty was "terrified" of the "fishbowl" that their lives would become.

Nonetheless, just weeks following Ford's inauguration, Betty learned she had breast cancer—and turned that fishbowl into a powerful educational tool, sharing her diagnosis and treatment with the public.

McCubbin put Betty's brave decision into perspective. "In 1974, you couldn't say the word 'breast' on television. Cancer was a death sentence, so you didn't really talk about it," she said.

"But overnight, Betty Ford changed women's health forever," said McCubbin, noting that across the country, women flooded their doctors with requests for screenings. "The next week, newspapers had diagrams of how to do self-exams. Betty started that conversation, and we have hundreds of millions of dollars that have gone into research because of her."

In a 1975 interview on CBS's 60 Minutes, Betty expressed support for legalized abortion and cohabitation, and took credit for convincing her husband to appoint a woman to his cabinet. Her outspokenness earned Betty the distinction of being the first first lady to draw protesters to the White House, angry that Betty was using taxpayer money to lobby congressmen. In response, Betty had a private phone line installed in the White House, carefully paying for it from her own bank account.

Nonetheless, in the 1976 presidential campaign, Betty was more popular than her husband. "There were campaign buttons saying 'Betty for President' and 'Betty's husband for President,'" McCubbin said.

Retiring to Rancho Mirage, California, following Ford's loss to Jimmy Carter, Betty's decades-long use of prescription medicine and alcohol came to a head. She entered inpatient treatment in 1978. McCubbin notes that Betty's candor again served the nation and created, in 1982, the Betty Ford Center in Rancho Mirage. To date, the center has treated more than 100,000 patients, many of whom cite it—and Betty—for saving their lives. 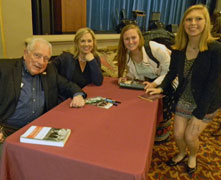 Hill and McCubbin signed books after the event."She said, 'If it's going to have my name, I'm going to have input.,'" said McCubbin, noting that Betty not only helped choose furnishings and hire staff, she maintained a hands-on relationship for more than 25 years. "Betty spoke at least once a month to patients," said McCubbin, who with Clint Hill was invited to visit the Center and interview its staff. "They adored and revered her," McCubbin said.

Hill's affiliation with presidential families began with Mamie Eisenhower, who often made him sandwiches when he was on detail for her elderly mother. Hill also had fond recollections of Jackie Kennedy, with whom he spent nearly four years.

"I was with Mrs. Kennedy on all her trips. Many leaders said she was the best diplomat we had," recalled Hill, whose 2012 book with McCubbin, Mrs. Kennedy and Me, was a No. 1 New York Times best-seller. "The first time the Mona Lisa left France, it was because Mrs. Kennedy talked with Charles De Gaulle on her trip to France in 1961. That's the kind of influence a first lady can have."

Hill gave an emotional account of his experience in Dallas with the Kennedys. Leading up to the Dallas motorcade, the Kennedys and Texas Governor John Connally had made appearances in Fort Worth and San Antonio. "They wanted the maximum amount of people to have the opportunity to see the president," Hill said.

He recalled hearing the first "explosive noise" and seeing Kennedy's reaction before he even realized it was a gunshot. Scrambling onto the back of the Kennedy limousine, Hill saw "a violent eruption of matter all over the place. I screamed at the driver to get us out of there, but I anticipated he was already dead, and that was the case."

Following her collaborations with Hill, McCubbin spent roughly two years on her latest effort, published by Simon & Schuster's Gallery Books. "Writing this book, I really came to fall in love with Betty Ford," McCubbin said. "It was an honor and a privilege, and I'm excited and eager for the world to learn about this amazing Michigan woman."