To celebrate 40 years of the Ford Institute, alums launch effort for a career-development fund 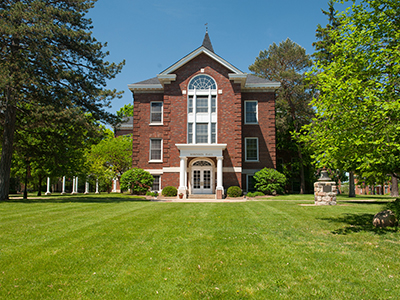 Robinson Hall (seen from Hannah Street), which along with the downtown Ludington Center serves as the home of the Ford Institute.There has always been a special bond involving alumni from Albion College’s Gerald R. Ford Institute for Leadership in Public Policy and Service.

Two generations of “Fordies,” as they are affectionately known, who have gone on to work in many facets of public service—from elected office to nonprofit work—have been shaped by the institute, which celebrated the 40th anniversary of its founding during the just completed academic year.

And now there’s a group of Fordies who want to help a new group gain the insight and experience that they enjoyed as Albion students.

“It is a very robust group of folks who still, one way or the other, are involved in some form of public service,” said Dwayne Kratt, ’89. “Some are office holders, some work in state government or in the federal government or as a lobbyist. It’s a good group of folks and I’d say there’s a wide representation on the political spectrum.”

Kratt, now senior director of government affairs for Diageo, the multinational distilled spirits company, majored in political science and history and developed his love of public service at Albion, thanks in large part to his Socratic give and take with the late professor Dr. Kim Tunnicliff, who served as the institute's director from 1985-99.

“I learned about Ford and quickly became part of it,” Kratt said. “Being a Fordie was one of my highlights in my time at Albion. We didn’t always agree but we could always talk about issues.”

Then he added with a laugh, “Dr. Tunnicliff was a great man even though I only agreed with him about half the time.”

With those experiences, Kratt is spearheading the Gerald R. Ford Fund for Professional Career Development and is hoping Fordies from across the spectrum will support the fund and help raise $25,000 by Oct. 5, when a celebration is planned for Homecoming weekend.

To date, nearly $11,000 has been raised and Kratt is optimistic the goal will be reached.

“It was the Ford Institute that made my college experience so meaningful,” Kratt said. “It introduced me to people who helped me along the way. It got me my internship, it got me to Washington, D.C., as an intern with the Peace Corps. Through that, I met some folks who got me to where I am now.” 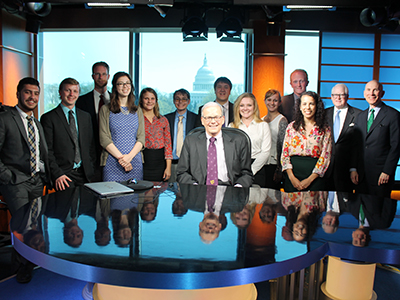 Ford Institute students make important connections during the annual senior trip to Washington, D.C. Above, 2017 seniors visited the C-SPAN studio with FCC chief policy counsel John Hunter, '69 (seated).The fund will help Ford students who are finding it difficult to take advantage of internships and development experiences due to financial hurdles.

“A lot of people aren’t able to do that because of cost and support,” Kratt said. “We need to find a way to be supportive so they can have those opportunities. That’s the genesis of what we need to do.”

Institute Director Patrick McLean has worked for several months with Kratt and the College’s Institutional Advancement office to create the fund. He sees it as a great opportunity, especially in the realm of providing the chance for paid internships.

“I would say providing internships is the most important thing we do for students,” McLean said. “The internships and the connections that are made, there’s nothing more important than that. It’s real-world experience and it helps students establish professional networks. And the students can bring those experiences back to the classroom. It all adds up to the overall goal that everybody has access to good quality internships at Albion College. We’re very grateful to our alumni for recognizing the importance of this.”

If you are interested in supporting the Gerald R. Ford Fund for Professional Career Development, or have any questions about the fund, please contact the Albion College Development Office at 517/629-0956.