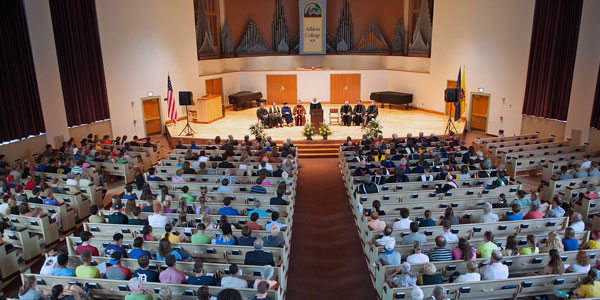 A Daughter’s Look at the Ford Presidency

Analysis of a presidency and a walk down memory lane combined for a uniquely enlightening evening as Susan Ford Bales presented the 2013 Stoffer Lecture on Aug. 29. The youngest child and only daughter of President Gerald R. Ford gave a heartfelt presentation and some thoughtful history to the hundreds of Albion College students, faculty, staff and community members gathered for the College's Opening Convocation.

Awarded an honorary doctorate for her decades-long advocacy supporting breast cancer research and education and effective treatment for combating chemical dependency, Ford Bales grew emotional as she thanked the College. "I know how very proud Dad would be that his daughter is being honored by this institution he so loved and so respected," she stated. "Albion College and the College's Ford Institute were a source of special pride to my dad."

With that, Ford Bales helped the students understand and appreciate the significance of her father's 18 months in office, from August 1974 through Inauguration Day in January 1977. Following the Watergate scandal and nearing the end of the Vietnam War, the country was in a "bitter season," with deep public distrust of the government.

Nonetheless, her father's accession to the presidency was seen as a positive step for the country. Then House Speaker Tip O'Neill voiced positive support for the new president, who was both a close friend and a political adversary. A 17-year-old at the time, "I was on top of the world," said Ford Bales on the family's move to the White House.

Just a few weeks later came a family crisis and one of the Ford presidency's unlikely legacies. Betty Ford's "controversial and courageous" decision to share news of her breast cancer changed the world's understanding of the disease. Ford Bales recalled the family discussions: Was it prudent to admit to disease within the First Family? "Could the president's wife even say the word 'breast' in public?" Ford Bales mused. "My mother announced that the time for women to hide disease behind closed doors must stop."

Ford Bales noted that the experience prepared her mother to later admit publicly to alcoholism and prescription drug dependency, and ushered in a new understanding of issues surrounding addiction.

Ford Bales also shared with the audience some less well-known achievements of her father's short time in office, grounded in his deep convictions for fairness and human dignity. President Ford, she noted, insisted that all countries that were part of the Helsinki Accords must agree to uphold human rights, the first such international agreement ever made. This action was widely criticized by both liberals and conservatives, yet Ford Bales explained that former Secretary of State Henry Kissinger later credited that provision with providing a framework for the anti-communist movement in the Soviet Union, eventually leading to the fall of Communism there.

President Ford also saw the opening of U.S. military academies to women; the adoption of Title IX, mandating equal support for women's athletics; and a change in banking rules to allow the introduction of the ATM machine.

"Dad had one question—What is best for the American people?—and he would do that," Ford Bales said.

Ford Bales also recalled her father's visit to Albion in 1977 for the dedication of the Ford Institute, which received, in 2012, a replica of Ford's statue in the U.S. Capitol. Ford noted again her father's pride in the institute, hoping it would be a long-lasting, living testament to his ideals.

"This evening, by the honor you have given me," Ford Bales concluded, "you have spoken to those future Albion students about the promise Dad made, and the extraordinary presidency that followed."