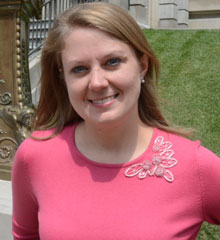 After graduating from Albion College in 2004, Libby Crabb has held a variety of fundraising positions in both California and Michigan. She moved to the San Francisco Bay Area after graduation and worked as an administrative assistant for a small affordable housing nonprofit in Berkeley, CA. From there, Libby moved into development work at Habitat for Humanity in San Francisco. Her role at Habitat involved grant writing, event planning, database management and individual giving. She says this experience was a wonderful education in fundraising best practices.

Libby moved back to Ann Arbor, MI, in 2008 and worked for Albion College in the annual giving and alumni engagement office. In 2012, she moved to her hometown of Grand Rapids to take the Development Director position at the Literacy Center of West Michigan. In her current role, Libby is responsible for raising $800,000 for the organization as well as managing communications and marketing efforts.

I was a typical over-involved student! I was a member of Kappa Delta sorority, Order of Omega, Alpha Phi Omega, Habitat for Humanity, and choir, among other things.

My most memorable experience was visiting Detroit with fellow Fordies during my first semester at Albion. Joe Stroud, the Director of Ford, was the former editor of the Detroit Free Press. He took us all on a bus to tour the city and we ended the night at a Tigers game. Joe died suddenly not long after that trip and I will be forever grateful that I was able to see Detroit through his eyes.

Enjoy your time at Albion! It's a unique experience to be part of the Albion College community and it lasts long after graduation. Do internships, have intense discussions with your professors and classmates, get really involved on campus, and spend as much time as possible with good friends. My closest friends today are those that were in Ford with me and those who were in my hall in Wesley freshman year.

There are so many ways that Albion and Ford prepared me. Above all, Albion taught me to think critically and understand that I am only one small piece of the larger world. Ford taught me to value diversity, to debate in a healthy way, and to be a really, really good writer. My internship for Ford was at a women's policy think tank in Washington DC and the only position they had open was in the development department. It's very literally how I found my career path and I've been doing fundraising ever since.