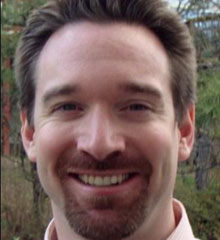 Kurt Medland grew up in Lapeer Michigan and attended Flint Powers Catholic High School. He attended Albion from 1994-1998, where he studied Political Science and Philosophy. As a sophomore, Kurt represented Albion in the 2000 Jeopardy! College Championship, where he finished as a semifinalist. Following graduation, he attended the University of Chicago from 2002-4, obtaining a Masters in Middle Eastern Studies.

After receiving his graduate degree, Kurt took a position as an analyst covering the Middle East at the CIA, where he remained until 2010, when he transferred to the State Department. From 2011 to 2014 he served in Cairo, Egypt, for the State Department, where he witnessed the aftermath of the removal of Hosni Mubarak and the revolution that ousted Muhammad Mursi. In 2011, Medland was the recipient of the Top 10 in 10 alumni award from Albion.

In addition to Ford, I was a member of the lacrosse club team, re-established the Philosophy Club, participated extensively in the Sleight Leadership program, the STRIVE program, and several other community-service oriented programs.

As a junior I participated in a study abroad program in Israel and Palestine along with several other Ford students. The program was cut short after hostilities broke out between the two sides.  Upon returning to campus, we all discovered that we were minor celebrities, as many students and faculty had been tracking our status throughout the excitement. The Ford Director at the time, Joe Stroud, along with the program's advisor, Sociology professor Len Berkey encouraged us to share our story, which we did in several fora. The support we received during that time was extraordinary and confirmed why I chose Albion.

Albion is a place where you can try just about anything in a supportive and caring environment - take advantage of that. Take risks, try out out-of-the-box ideas, and above all, learn and grow through each experience.

At Albion and specifically in the Ford Institute I learned the value of public service. Ford gave me the opportunity to explore different ways to express my interest in public service, including through projects aimed at improving town-gown relations, an internship at the Albion Economic Development Corporation, teaching a local leadership class in the Sleight Leadership program, and a study abroad experience in the Middle East. Ultimately, my Albion and Ford experience convinced me to continue studying the Middle East with the goal of government service.

The government is always hiring people with liberal arts backgrounds and other relevant skills.  For people looking to work in foreign affairs, area and language studies during graduate school will be the best way to make yourself a more attractive candidate.

I had two separate experiences. As a junior I studied abroad in Jerusalem, examining the Israeli-Palestinian conflict. The program was cut short in Jerusalem and we were evacuated to Cyprus following the outbreak of the second Intifada.  After I returned, I took an internship with the Albion Economic Development Corporation, where I helped with initial studies on establishing the now active Albion business incubator, among other projects.