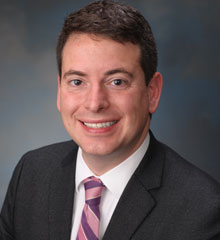 Bill Sweeney is Chief of Staff to U.S. Senator Debbie Stabenow (D-Michigan). In his more than 15 years with Stabenow, he has served in a number of positions in her organization, including fundraiser, Speechwriter, Senior Communications Adviser, and Deputy Chief of Staff. He was named Chief of Staff in December 2014.

Sweeney is a native of Wayne, Michigan. After graduation from Albion College in 1998, he worked as a fundraiser for the gubernatorial campaign of Doug Ross in Michigan, and then worked on the campaign that elected now-Senator Tammy Baldwin to the U.S. House of Representatives in Wisconsin. He started working for Stabenow in 1999.

Mock Senate was one of my favorite experiences in Ford. We were terrible. We screwed around and didn't follow directions and were unabashedly hostile to the TA who played the Vice President. We foreshadowed the nihilism of the Tea Party by 20 years.

You're spending four years of your life at a liberal arts college - so get the most out of it. Broaden your horizons - take classes in the fine arts, music, literature, economics, chemistry, biology -- you will never again in your life have the chance to do these things, so do it now or you'll regret it later. Employers will never care about what classes you took, so take things that YOU find interesting and that expand your horizons. You'll find those classes pay off a lot more in the long run.

Ford teaches you many things - how to think critically, how to write beautifully, but most importantly how to lead through service to others. Every day, I'm using the lessons I learned in the Ford Institute.

Every day brings something new on Capitol Hill. We love having Albion students in to intern.

I worked at the Albion Volunteer Service Organization (AVSO) in downtown Albion for my internship, where I helped secure a $2 million grant from the Kellogg Foundation for capacity-building.