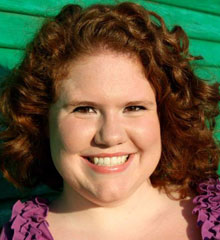 Paige Narins is an enthusiastic young professional living, working and playing in the great city of Detroit. A recent graduate from Albion College, she currently coordinates member services and engagement efforts at the Detroit Economic Club. She also assists in event management and sponsor relations. Outside of the Club, she is co-chair of the Albion College Alumni Chapter for Metro Detroit. She also remains a volunteer for the Michigan Economic Development Corporation's LiveWorkDetroit! initiative, a program which was instrumental in her decision to make Detroit and Michigan her home after college.

Being a part of the 2013 Sleight Leadership Fellows program was probably my favorite memory.The Ford Institute in general is a high point for me at Albion, but that program was so eye-opening and is what sealed an already strong desire to be in Detroit after I graduated. I made some great friends, learned so much about not only the city's rich history, but also its current challenges and champions.

Give yourself room to step out of your comfort zone. Use any chance you get, but especially your first year to explore and take classes in other things that interest you. You never know when you might find a fun subject to use elective classes on or even a minor or a new major! Also, whether your course of study requires it or not, DO AN INTERNSHIP. Put yourself in situations that could potentially change your mind. If it does, then you've found your new calling. And if it doesn't then your original plan truly is the path for you.

Albion's liberal arts education gave me the building blocks to be successful wherever I went. The Ford Institute gave me not only the tools but also the desire to be successful in my career in Detroit, especially in my current position with the Economic Club. Being able to personally help the the 2015 Sleight Leaders get involved in one of our meetings was such a satisfying, complete circle feeling for me.

A lot of people upon hearing of my choice to go to Detroit after graduation ask me: Why Detroit? Thanks to the knowledge and appreciation I attained through programs like Sleight, I can very easily respond that Detroit is being hailed as one of the most entrepreneurial cities in the country. And that spirit and drive resonates everywhere in the city. It's infectious and exciting to be a part of something like that and, as a young professional, who wouldn't want to live and work in that kind of environment?

Hard work is noticed and appreciated in this city and even better – it actually makes a difference. The work that one accomplishes here not only has a local effect, but it also has the ability to have a national impact by changing the dialogue that we as a region and we as a nation have about Detroit. During my four years at Albion, I utterly fell in love with Michigan. The people, the landscape, but mostly the opportunity. I knew that once I graduated, there was no other place in Michigan that I wanted to be other than right in the heart of one of this state's, and really this country's, most talked about cities.

If I and my friends and colleagues have our way, in five years, people will be talking about my city in a much different, more positive way than they are right now. In recent years, so many people have viewed Michigan, and Detroit in particular, as a sinking ship. But I've never seen that. I see a city with a rich history that has fallen on hard times and just needs some tirelessly helping hands to hoist it back up. I see a city with an awesomely optimistic foundation of leaders, both young and experienced, who are doing some truly phenomenal things for Detroit. And I see a city that has the potential to be the greatest comeback story of our generation.