Colleges and universities nationwide seek to reduce and eventually eliminate their carbon footprint through the long-term, aggressive initiative.

There is a vision in the not-too-distant future where Albion College is viewed as one of the forces that helped find a solution to the global issue of climate change.

As well, students, faculty and staff will recall a day when the burning of archaic coal and oil were actually used to heat buildings and light classrooms.

They will point with pride to the solar arrays lined up just off campus and wonder about a time when solar energy was considered impractical.

And they may well shake their heads in amusement at the thought of a “carbon footprint” and wonder what such a thing even meant. They will wonder why climate change was ever an issue in the first place.

It is only a vision now, and certainly not yet in focus, But it may be a little closer to reality thanks to Albion’s commitment to join the nationwide Climate Leadership Network, a collection of colleges and universities taking action on climate change and education to solve the climate challenges that await.

“As a liberal arts institution focused on purpose, belonging and action, this commitment aligns well with our values,” said Dr. Mathew Johnson, president of Albion College. “We know that our campus needs to make progress towards carbon neutrality and this commitment solidifies our plans to do so.” 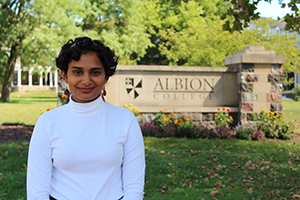 “The Climate Leadership Network is a public statement that the College believes climate change is one of the biggest crises of this century,” says biology and math major Tanya Jagdish, ’22, a member of Albion’s Center for Sustainability and the Environment. “It is pushing the College to have more conversations.”The idea to sign onto the initiative was first presented to the administration by Tanya Jagdish, ’22, a biology and mathematics major and member of the College’s Center for Sustainability and the Environment (CSE).

Her interest in climate science has run long and deep, going back more than a year with her Foundation for Undergraduate Research, Scholarship and Creative Activity project focused on collecting data regarding the College’s greenhouse gas emissions and its need to become more carbon neutral.

“I talked to Dr. Johnson over the summer about joining the Network and he was all for it,” Jagdish said. “It’s a huge initiative and a lot of colleges are part of it. This generation is very conscious of climate change because it’s going to affect our future. Students are very open and opinionated about it.”

“We have to do a careful audit of energy use on campus and this committee is set up to get that going,” Wilch said. “Carbon neutrality is a big goal and this is a long-term commitment. I think joining the Climate Leadership Network is very important because it reflects the College’s commitment to helping mitigate climate change. There’s a renewed interest in environmental sustainability as an institution and there’s a high level of interest in people working on green energy initiatives.”

But it will not be an easy, or quick, fix.

“Within a year, we will draft a campus plan to facilitate community goals for carbon neutrality,” Dr. Johnson said. “This process will include completing a greenhouse gas inventory and identifying options for greenhouse gas reduction. Within two years we will be required to complete a campus-community resilience assessment, which will include some initial indicators and current vulnerabilities.” 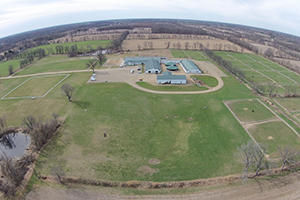 “It’s land we currently own but don’t use as part of the equestrian center,” Laditka said. “There’s a ton of work that goes into it. We need to lease the land to a partner that would install the arrays and we’d need to get Consumers Energy to agree to buy the energy. There are a lot of steps.”

White is also playing a key role in the effort in addition to a number of faculty, staff and students across campus.

“We need to audit carbon emissions, and CSE has had various students working with Facilities on this,” White said. “We also need to increase community education on climate change and help people make lifestyle choices.”

He, too, is intrigued by the idea of solar arrays generating electricity for the College.

“Over time, as the [electrical] grid becomes greener, we can hope the College can stop burning coal and natural gas,” White said. “And there are other options, too -- like biogas and geothermal. It’s all about eliminating greenhouse gas emissions.”

As well, the College is planning to hire a student to take on the duties of campus sustainability coordinator who will collaborate with various departments and create programs that can build toward future climate success.

That’s because, in the final analysis, it is students who will decide the success or failure of the climate initiative.

“The Climate Leadership Network is a public statement that the College believes climate change is one of the biggest crises of this century,” Jagdish said. “It is pushing the College to have more conversations about the environment.”