The current screen-scoring graduate student at NYU was commissioned to compose an original piece of music to celebrate the 50th anniversary of Earth Day. He did that and more.

How do you put nature to music? What are the notes that signify a planet in flux? Where do you take a melody that tries to offer hope for the future with a warning from the present?

Powell is an Ann Arbor native who earned his degree in music, and his new composition titled “Viridity” is a celebration of Earth Day, the worldwide environmental movement which celebrated its 50th anniversary in April. Unfortunately for Powell, who had hoped to unveil his work as part of a campus and community celebration last spring, the COVID-19 pandemic swept in and changed everything.

But the music endures. It always does.

“I was trying to capture the feeling of nature and Albion and how it resonates with me,” said Powell, who is in his final year of graduate school at New York University as he seeks a master’s degree in screen scoring (creating music for films, TV, video games, etc.). “I tried to harp on my experience at Albion, the surrealism of nature and the power of it.”

And with the help of a stipend from the Dr. R. Bruce, ‘67, and Jane Harper Earth Day 50th Anniversary Gift, which last year pledged more than $100,000 for Albion to address environmental issues, Powell set out to put that movement to music. 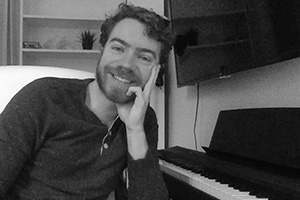 "It's a piece to bring people together," says Ryan Powell about his composition titled "Viridity."“The idea actually came from Bruce Harper,” said Doug White, an Albion biology professor and director of the College’s Center for Sustainability and the Environment. “When he was a student here he recalled a professor in music who composed and presented an original musical composition. That was a memorable thing for Bruce and he wondered if we could do something like that for Earth Day.”

“I left him with complete artistic freedom for it,” White explained.

“I was excited to jump on the project and help out,” Powell said.

And in just over six months, working on his laptop and from his parents’ home as well as in New York City, he created “Viridity,” which is defined as “the quality or state of being green” and, as an alternate definition, “naive innocence.”

The piece is keyboard dominant with flourishes of synthesizer as well as some computer-generated music, Powell played all the instruments.

But he went a step further and created a video to go with the music. This summer, Powell and a friend, Antonio Corsi (who attended Albion but graduated from Michigan State University), returned to Albion and shot dramatic nature video at Victory Park and the Whitehouse Nature Center. The video was edited by another friend, Zoe Kissel.

“I thought we’d get some sheet music and maybe we’d get a group to perform it on campus for our Earth Day celebration,” he said. “I did not expect a video production.”

But the work was exactly what he had hoped to see.

“It was a meditation on the environment,” said White, who said there are plans to present the work when Earth Day festivities return. “It’s very layered and meditative and very positive.”

Powell was pleased with the final product as well and hopes the work will find an audience not only for Earth Days to come but in whatever situations people feel the need for the influence music can have.

“I want to send it out to whoever is interested in listening,” he said. “It’s a piece to bring people together.”