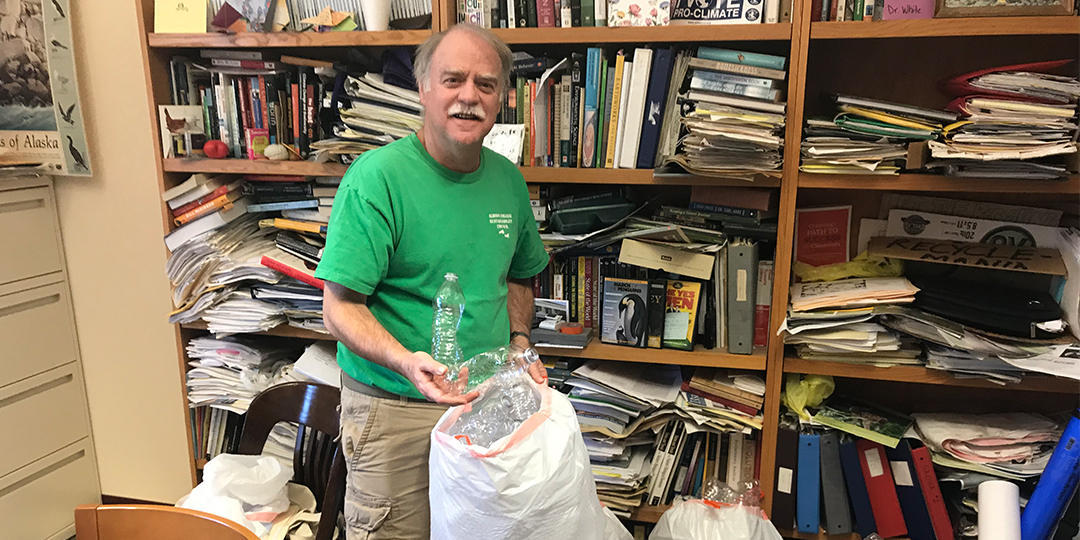 It will be an acknowledgement of a valuable gift, a nod to the College’s past and, perhaps, a cautionary tale for the future of the planet.

That’s the goal of Doug White, biology professor and director of Albion’s Center for Sustainability and the Environment, with his creation of a “water bottle falls” later this semester. 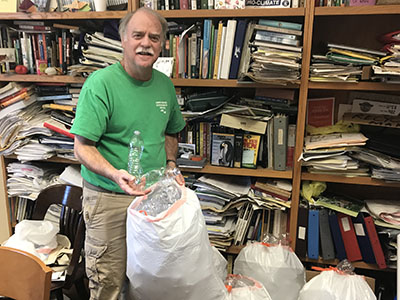 Doug White, director of Albion College's Center for Sustainability and the Environment, has been collecting plastic water bottles since last fall to create, along with his CSE students, a bottle waterfall that will be displayed in the Science Complex atrium.“It’s an environmental art piece,” says White, who, with the help of students, has so far collected a half-dozen six-gallon bags full of used, clean (and, yes, empty) water bottles from around campus since last fall.

With the start of a new semester, White will have students in his CSE class string the bottles together on monofilament line. Later in January, the finished work, resembling a waterfall, will be hung in the Science Complex atrium.

It’s a project similar to what White did in 2007, when he worked with art and art history professors Lynne Chytilo and Bille Wickre and students from their “Art and the Environment” class.

But this project has a purpose all its own.

First, it’s to acknowledge Bruce Harper, ‘67, and his wife, Jane, who created the $108,000 R. Bruce, '67, and Jane Harper Earth Day 50th Anniversary Gift to celebrate the milestone of the environmental movement in April.

Part of the gift was the installation—which began last fall and continues through this semester—of dozens of water bottle refilling stations around campus in an effort to cut down on the amount of plastic used.

The waterfall is also an acknowledgement that Albion was featured on CBS News in 1970 in the first Earth Day celebration that saw students around campus cleaning up the Kalamazoo River and engaging in a campus-wide can-stomping event on the Quad. 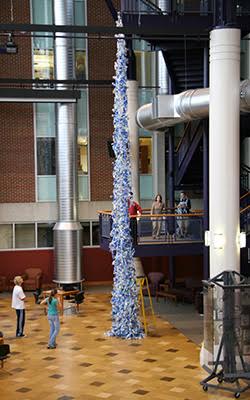 Doug White and CSE students, with art and art history professors Lynne Chytilo and Bille Wickre, created a bottle waterfall in 2007 for their Art and the Environment course.It’s also a not-so-subtle message that plastic remains a major part of American life. And that, perhaps, the waterfall will provide a source of enlightenment, education and a call to action.

Clean water bottles are still needed for the project. If interested in contributing, please bring them to Doug White’s office at 150 Putnam Hall.

“Environmental art pieces are usually up for a couple of weeks,” White said with a smile. “That’s the ephemeral nature of the environment.”

A Semester of Events

The Harper gift will also help fund several other events to bring attention to the environmental issues facing the planet.

On March 10, Sean Harris from Ranger Power, a solar energy utility in New York, will speak to CSE students at 7 p.m. regarding the company’s solar farm in Calhoun County that is expected to cut carbon dioxide emissions by 244,000 tons a year when it begins operation. The following day he will speak to the environmental classes of professors Nicolle Zellner and Sheila Lyons-Sobaski, from the departments of Physics and Biology, respectively.

Additionally, beginning on March 25, the Bohm Theatre in downtown Albion will host a series of three films, starting with “The Anthropocene,” which explores the impact humans have had on the planet.

On April 1, the Bohm will show “Flint: The Poisoning of an American City.” It will be preceded by a reception at the Ludington Center, and Rev. Gregory Timmons, Flint’s tecovery coordinator, will introduce the film and participate in a Q&A session afterward.

On April 8, Jason Raddatz, director of the Whitehouse Nature Center, will host a beekeeper school at the Center; that event will be followed by the Bohm’s showing of “The Pollinator,” about the distress suffered by bee colonies.

All three films start at 7 p.m and are free and open to the public.

“It’s kind of a mini environmental film festival,” White said, adding that more events are in the planning stages.

Read more about CSE, its history and its plans for the future in the Fall-Winter 2019-20 edition of Io Triumphe!