Gift From Bruce, '67, and Jane Harper Aims to Help a Planet Under Siege 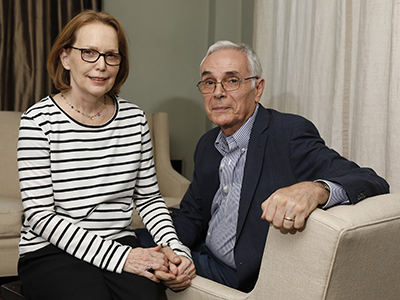 An interest in the environment has spurred Bruce, '67, and Jane Harper to make a $108,000 gift to Albion College in an effort to increase awareness of climate change and the 50th anniversary of Earth Day next April.Bruce and Jane Harper want to do their small part to help the planet, the environment and Albion College. Because they know even the smallest step can eventually lead to big changes.

“The environment has been of interest to me for quite a few years,” Harper says. “And it’s become a much more urgent issue the last couple of decades.”

And he hopes that urgency can be conveyed with urgency to the next generation of students who will be tasked with helping a planet under assault.

He was also part of a generation that saw social issues as a responsibility. So when Earth Day was created on April 22, 1970 he, and millions of other Americans, saw it is a call to action.

By then, Harper was already working toward his medical degree at the University of Michigan before embarking on a long and distinguished career as chief of cardiothoracic anesthesia at St. Vincent Hospital in New York City and then as a physician at New York’s Lennox Hill Hospital.

But the environment, and what mankind was doing to it, was never far from his thoughts.

The goal is three-pronged: to help the environment; to help Albion College; and to advance long-standing efforts to increase awareness and action regarding the environment.

And steps are already under way.

When students checked in for the start of the semester last week, they were handed the more energy-efficient LED light bulbs. As well, more than 20 water bottle refilling stations are in place around campus (previously there were six) with another 40 or so to be installed throughout the year.

“It’s about getting people interested,” Harper says. “Albion students should be leaders in the country. They can go out and lead. My real hope is getting students excited and interested in the environment. I hope there’s a groundswell of interest.”

He also thinks students who are involved in the Foundation for Undergraduate Research, Scholarship and Creative Activity (FURSCA) could contribute.

“These students are interested in a particular area and they go out in the world and expand on it,” Harper says. “I would hope to generate that kind of interest in students when it comes to environmental sustainability.”

Jane Harper, an artist in the New York area, met Bruce at a Buddhist World Peace conference and married him 13 years ago. She has also been interested in environmental issues, having a love for nature. She was inspired further by Bruce’s enthusiasm and enjoys the common interest in sustaining the planet.

“Bruce pulled me in,” she says. “I think global warming is a real issue and it gets into a situation where people can’t talk about it because we’re so polarized. We need to be looking for contemporary ways to be responsible.”

The Harpers also want Albion to return to a list it hasn’t been a part of in a few years.

Sierra magazine offers an annual listing of the most environmentally “green” colleges in the country, and Albion was last on Sierra's "Cool Schools" list in 2016.

Albion biology professor Doug White, who recently took over as director of the College’s Center for Sustainability and the Environment and will administer the gift, said the six-figure gift can do wonders for re-establishing Albion in that role.

In fact, he would like to start this fall with what he calls a "half Earth Day" celebration in October, six months ahead of the official 50th anniversary. Plans also include everything from planting trees to environmentally themed events and activities that will involve the entire campus, to bringing in speakers and hosting workshops to celebrate the event.

“It’s a lot of money to spend on environmental education,” White says. “And it fills a lot of gaps. The need is tremendous.”