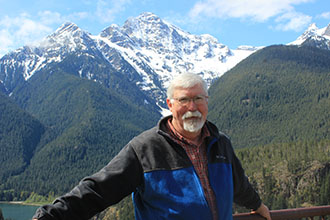 Albion College professor of geology Tim Lincoln said alumni played a huge role in the 2017 Center for Sustainability and the Environment trip to the Pacific Northwest. "I sent them letters and said, ‘We’re coming. Any ideas?’ I probably got 30 ideas."In May, geology professor Tim Lincoln led his 17th, and likely final, Center for Sustainability and the Environment (CSE) trip to explore a part of America and its local environment, a journey that over the years has proven enriching and disturbing, often at the same time.

Whether it’s wetland destruction in New Orleans or mountaintop mining in Appalachia or forestry in New England or habitat loss on the Chesapeake Bay, Lincoln, in his role as director of CSE, has taken students across the country to face the environmental issues head on.

And perhaps nowhere are those issues presented in such stark contrast as in the Western U.S., where issues run from water shortage to land use to natural disasters.

So for nearly two weeks starting on May 8, Lincoln brought 14 students from his Ecology and Environmental Issues class, as well as five faculty and staff members, to the Pacific Northwest to observe what one region is doing to do to deal with environmental change.

It was a bittersweet trip for Lincoln, who every year has taken a class on a journey of discovery and every other year has made the trip a long-distance adventure. But he’d already decided before the group boarded a train for Washington State this spring that enough was enough—though he will continue to teach at Albion.

“I’ve traveled with a lot of wonderful students, had a lot of help from many colleagues, especially (history professor) Wes Dick and (biology professor) Doug White—both participated in nearly all of the trips. But I’m 66,” he said with a laugh. “I’ve spent a lot of nights sleeping on the ground.”

It was also no coincidence that Lincoln’s final trip with his CSE students was to the same destination he visited on the first trip he organized for it, nearly 20 years ago.

And he admits the world has changed in that time. Climate change and its impact are now front and center in a public dialogue, even if major advances to reverse it are still in the developmental phase in many cases. 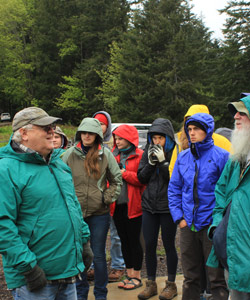 Brad Collins, '70 (left), a longtime environmental proponent who has lived in Port Angeles, Washington, for many years, speaks with the Albion College CSE group that went on a nearly two-week trip to the Pacific Northwest in May.

But as the group toured everything from the self-described greenest office building in the world in Seattle, to a wastewater facility that doesn’t look and act anything like one, to a company striving to be more eco-friendly, to observing the positive results of a dam removal, Lincoln sees reason for hope in the ecological battle.

On this trip, Lincoln called on the resources and interests of Albion alumni, more than 200 of whom live in the Seattle area.

“Sometimes I put a real theme on a trip,” Lincoln said. “But this trip, I realized alumni are a wonderful resource. So I sent them letters and said, ‘We’re coming. Any ideas?’ I probably got 30 ideas.”

Indeed, Lincoln received so many ideas from alumni that he couldn’t accommodate them all. So he selected a few that would offer his students a cross-section of experiences—with people working in the private sector; with government employees at all levels, from city to federal; and with folks in the nonprofit realm.

One of the more intriguing meetings was the two days the group spent with Brad Collins, ’70, a former city council member in Port Angeles, Wash., who now is an interim planning director in nearby Tukwila and has been passionate about environmental issues for years.

Collins showed them the results of a project completed three years ago that removed the Elwha and Glines Canyon Dams from the Elwha River and how the river has been rejuvenated. It is still the largest dam-removal project in the world.

And it was a project that had an impact on Mike Dussel, ’17, who graduated in May with a degree in environmental science and is planning a career in natural resource management and conservation.

“The central theme for this trip was how could humans live in an environment and impact it as little as possible,” he said. “This dam removal showed how a local community is dealing with that. The dam was removed and eventually the river’s health was restored.”

A member of the Gerald R. Ford Institute for Leadership in Public Policy and Service, Myers decided he wanted to have an impact on sustainable business and took his ideas to REI, which is trying to be on the forefront of producing quality products that don't damage the environment.

“They answer to people who love the outdoors,” Lincoln said. “When Kirk said, ‘It’s not enough to not do harm, you have to make things better,’ that stuck with me.”

The CSE group met alumni at Starbucks headquarters in Seattle for a discussion on the company's sustainable coffee-growing practices.Another alum, Bruce Bethards, ’87, is director of market planning for coffee giant Starbucks. He talked with students about sustainable coffee growing and how to improve coffee-growing conditions at high-altitude small farms in East Africa, Indonesia, and Central and South America.

Lincoln said connecting with alumni in the region, especially with those who are deeply involved in sustainability and the environment, resonates with the students.

“It makes them realize that those jobs are more accessible to them, and that’s enormously powerful,” he said.

Among other stops for the group was an eye-opening trip to the Brightwater Sewage Treatment Plant, a state-of-the-art facility north of Seattle that uses special filters and deep wastewater tunnels to alleviate the odors normally associated with sewage treatment plants. Indeed, the facility—which also features a 40-acre wildlife habitat and a small art gallery—also intrigued Lincoln for another reason.

“When I heard about a sewage treatment plant that also hosted weddings, I had to see that,” he said.

The group also visited the Bullitt Center in Seattle, tabbed as the most sustainable office building in the world. It features solar panels, composting toilets, rainwater retention ponds, a geothermal heating system and more.

“They utilize composting toilets, which on the surface sounds kind of gross,” Dussel said. “But their system was very good. They reduced water usage by 95 percent just by going to compost.”

The group also visited the Department of Energy National Labs in the region and heard about work on producing uranium from seawater, oil from algae and other projects that at one time might have sounded like something in a science-fiction novel but are now reality.

And while Lincoln is cautiously optimistic about efforts to improve the environment, Dussel, a Cassopolis, Michigan, native who has been interested in environmental work for years, is even more hopeful.