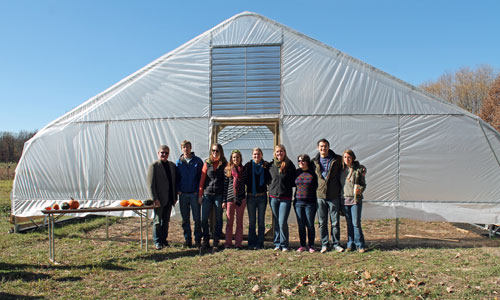 Even autumn had a good time as the Albion College Student Farm dedicated its new hoop house October 27. The crowd included the family of Linda and Rich Baird, '78, who presented the Good Soil Growhouse in honor of daughter Jessie Baird, '11, one of the Student Farm founders.

Rich Baird came to the podium as Jessie, overcome by emotion, struggled to begin her remarks. "Jessie didn't want a graduation trip, she didn't want money, she didn't want a party," said Rich. "She just wanted this thing, to help the farm continue. I'm so glad we were able to give this gift for her."

Geology professor and Student Farm adviser Tim Lincoln noted that the hoop house addresses one major challenge of a college-based farm. "The students leave campus in April and don't return until the end of August, which makes farming tough," he said. Although the farm does have a few student workers during the summer, he noted, "This hoop house will remarkably extend the growing season."

The 1,440-square-foot Growhouse is a sort of "greenhouse on wheels." In early February, peas and other plants will start under the hoop house in its current location. At the end of March, as those plants are able to withstand early spring temperatures, "we will roll the house to the west and plant tomatoes," Lincoln said. "This is a very elegant and efficient solution."

Lincoln told the audience that the student farm grew from Jessie's research into gardening and people's attitudes toward the sources of food. "We want to understand basic principles but we also want to use that knowledge," he said. The farm was a way for Jessie and other students to "put to work what they learned."

"Sustainable agriculture was a meaningful uncovered interest that allowed me to make sense of my complete education and to provide a service to the campus and community," Jessie said of the passion that directed her Albion career. She further recalled a piece of advice her father gave her when she began her studies. "You told me, 'There is nothing on earth you cannot master with enough sweat, using the tools God gave you,'" she recalled. "Little did you or I know that I would take the sweat sentiment so literally."

"I started thinking about a farm as a way to get more sustainable food into the dining hall," Jessie recalled. "I thought I'd have a little plot with a few rows a lettuce. This has exceeded my expectations and is a place that draws the community. I think that's one of the most important things."

"I'm just overwhelmed," she said. "This is amazing."