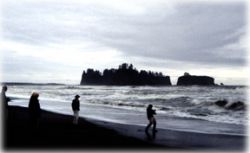 We also visited the coast, mountains, and saw the controversial Elwah River dams while on the Olympic Peninsula. 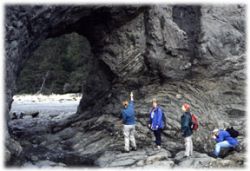 The geology along the coast is fascinating. The rocks are a jumble of blocks of all sizes, a chaos created by the collision of North America and the Pacific Plate. Here students are pointing out one of the blocks.

The biology is equally fascinating. Here students are looking at zonation in one of the tide pools. 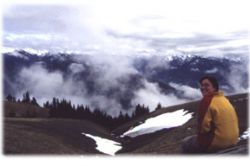 Hurricane ridge is in the Olympic range and looks out over the high peaks of the Olympics. There was still a lot of snow on the trails, and we had to drive through the clouds to get there, but the view was spectacular.... and well worth the drive. 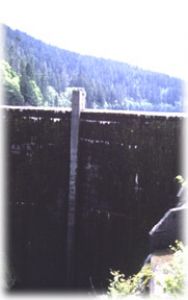 Elwah River has two controversial dams constructed early in this century to provide power for Port Angeles. These are too tall for fish ladders (which were required by state law at the time of construction; fish hatcheries were constructed instead). These are located within the boundaries of the Olympic National Park. There has been a lot of discussion of, but as of yet no funding for, the removal of these dams. The picture on the left is of the upper dam. Below is a picture a natural stretch of the Elwah River.