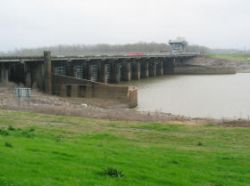 As we drove south, we were able to stop and visit several river engineering projects that have a profound effect on the delta. Older projects were intended to prevent flooding and improve navigation. More recent projects are intended to remediate some environmental consequences of the earlier projects.
The most upstream project we visited was the control structure at old river. Actually a complex of projects, including a power generation station, this controls the distribution of water between the Mississippi and its major northern distributary, the Atchafalaya. Without these structures, many believe that the Mississippi would have switched its main flow to the much shorter Atchafalaya channel to the sea. 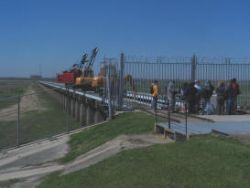 The Bonnet Carre' Spillway, just upstream from New Orleans, represents one the last ditch, but most effective ways that flood waters are controlled. This structure can open a 7,000 foot wide gap in the levee system, diverting water through a floodway into Lake Pontchartrain. This relieves pressure on downstream levees. In its natural state, the river had many such distributaries, and these fed fresh water into Southern Louisiana's complex of fresh and brackish water marshes. With most distributaries blocked, saltwater incursion is a problem 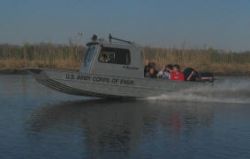 Davis Pond freshwater diversion structure is an attempt to recreate the effects of natural flooding, and to regulate salinities in a broad swath of land, roughly from New Orleans south to the gulf, between the Mississippi and Bayou Lafourche. Here, students are traveling within the project area in an ACE boat. 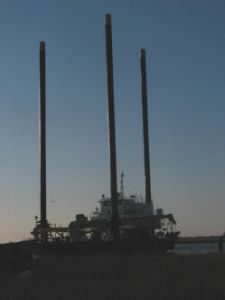 One concerned party in the area is the oil industry. As much as 25% of the nation's oil comes onshore across the Louisiana coast, and serious erosion could jeopardize this infrastructure. Here, along Bayou Lafourche, an offshore "jack-up rig" is being readied for deployment. We also saw that canals built throughout the wetlands contribute to the problems of erosion and saltwater incursion. 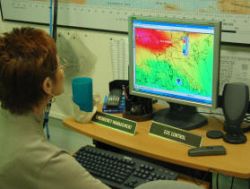 The Jefferson Parrish Emergency Preparedness Center houses people who will try to manage the situation should natural disaster strike the area. We learned that flooding from the sea during a hurricane is a much more likely problem than flooding from the river. The computer screen shows the depth of flooding from a possible storm predicted by computer models. Over 12 feet of water are possible in many thickly settled areas. With limited highways, it is estimated that it could take as long as 72 hours to fully evacuate the area, and presently, forecasting cannot predict storms that far in advance.