South Florida... the everglades, the Keys, America's destination, gridlocked freeways, flood control projects, wetland restoration projects...all the contradictions that comprise South Florida were our focus in 2008. The trip was centered on water and the Everglades, a wetland that historically occupied most of Florida south of Orlando. We studied the century long efforts to drain and tame the wetlands, followed by a nearly half century long effort to restore much that was altered by those efforts. Our time was divided between the "reclaimed" urban and agricultural areas and the remaining habitat in the Everglades National Park. Today the Everglades are the focus of a massive, but underfunded, effort to restore the natural wetlands while sharing water with the burgeoning population of urban coastal areas. 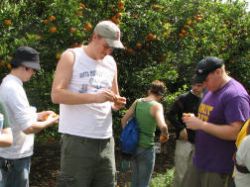 Read more about the trip in these articles: