We spent several days exploring the Bay and the surrounding communities. Coastal habitats and fisheries were the focus of our time there 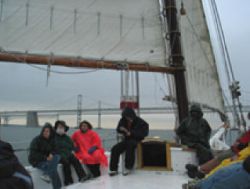 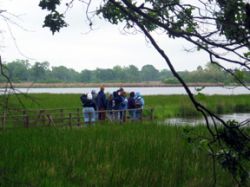 The highlight of our time on the bay was a day-long cruise on the historic skipjack Stanley Norman operated by the Chesapeake Bay Foundation. On the left, we prepare to cross under the Bridge. 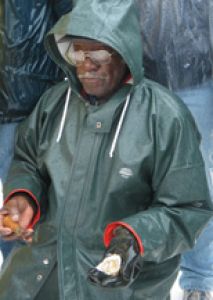 Above, the crewman demonstrates shucking oysters. Oyster production has fallen to a small fraction of its historic levels. Invasive diseases, over-production, and pollution all probably share the blame for this.

The Blackwater National Wildlife Refuge protects a large area of salt marsh habitat on Maryland's Eastern shore. Here we saw numerous osprey and bald eagles. We also say research efforts aimed at controlling Nutria, an invasive species of rodent that is destructive to the marsh. The refuge gave us a sense what the pre-colonial bay was like. 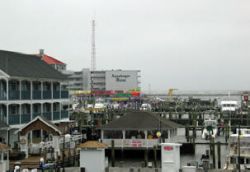 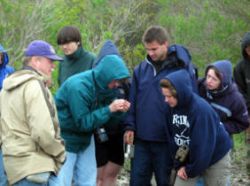 Though not part of the Bay, we crossed over the Delmarva Peninsula to visit Maryland' Atlantic Coast. On the left, Dr. Dean McCurdy, Albion College biologist, shows students invertebrates in a salt marsh on Assateaque Island. Above right, Ocean City, due north of Assateaque, shows the over-development of a similar habitat. 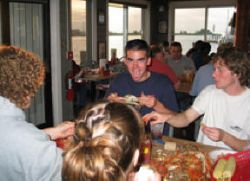 How can you appreciate the seafood for which the Bay is famous without sampling it? We spent a lively evening in an eastern shore "crab shack". Our server was a fourth generation waterman, who spent her spare time helping students see the issues from commercial fisherman's point of view. Sadly, the crabs we were served came from Louisiana.