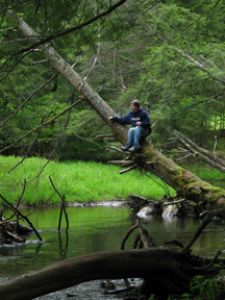 As we drove to and from the Bay, we had opportunities to see many of the issues in the watershed that affect the bay. We were able to compare unspoiled portions of the watershed to areas affected by acid mine drainage, poor agricultural practices, urbanization, and dams.

In the Allegheny National forest, Alumnus Kirk Johnson showed us unspoiled reaches of stream that his organization, Pennsylvania Wild, is working to protect as wilderness. Originally, most of the Chesapeake watershed was forested. The forest soils led to a balanced release of water and nutrients to the streams and the Bay. Loss of forest cover, much of which occurred in colonial times, was the first major cause of the Bay's decline. 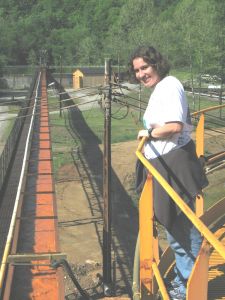 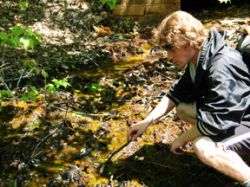 Acid drainage from abandoned coal mines is a concern in western Pennsylvania. We saw a stark contrast between untreated water flowing directly into streams (above right) from some sites and the treatment (above left) that a more responsible operator, Duquesne Power and Light, uses to restore water to a level that allows trout rearing in their holding ponds. 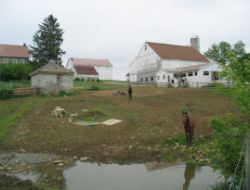 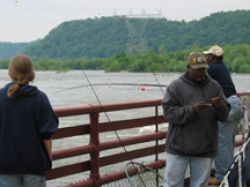 Farming practices also affect water quality. Overgrazing and allowing stock into the stream have destroyed this Lancaster County stream's banks, clearly contributing to the sediment load and turbidity of the water.

Dams have had a serious impact on migratory fish, blocking their path up the stream. Students are talking with fishermen on a dam on the Susquehanna. This dam has been equipped with a fish elevator in hopes of reestablishing shad and other fish runs on the river. 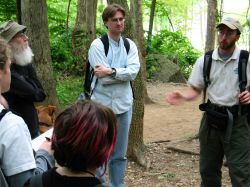 Many are working to restore the watershed. Here Albion Alumnus, Matt Berris describes his work with the Potomac River Conservancy. this organization works with landowners along the river to engage in best practices to control sediment and nutrient loads.