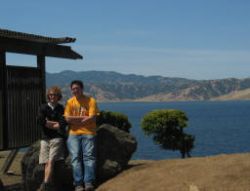 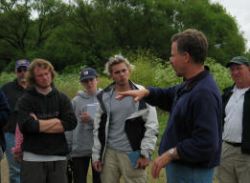 The central valley of California, prior to transformation, is described as having been an "American Serengeti". The two major rivers, the San Joaquin and Sacramento, and their many tributaries from the Sierra Nevada flooded annually, depositing rich alluvial soils and creating vast wetlands. The streams were habitat for prolific salmon runs, the marshes home for immense flocks of waterfowl, the grasslands home for herds of Tulle Elk. It is estimated that thousands of Grizzly bears inhabited the valley.

Now the only bears to be seen are on the state flag. The rivers have been dammed, the land leveled, the seasonal flood waters held back to be distributed throughout the valley as irrigation waters. The region has been transformed into one of the worlds great agricultural districts. The economic benifits are inarguable, so is the loss of habitat.

A few areas remain where it is possible to get a glimpse of what the valley must have looked like prior to its agricultural transformation. Here, in the San Luis National Wildlife Refuge large wetlands with native tulle reeds provide sanctuary for migrating waterfowl. The adjacent Kesterson area is infamous for having had water poisoned by runoff from irrigation projects. 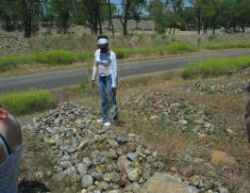 Historically, the transformation of the valley began with the mining operations following he gold rush. Here, miles of stream valley still show the effects of dredging for gold. Elsewhere, hydraulic mining stripped topsoil from areas in the foothills and led to silting up of channels and flooding in the valley. Some of California's first environmental legislation was aimed at curbing these mining practices.

The San Luis reservoir is the lynch pin of the irrigation system on the western side of the central valley. Water from the north is stored here during periods of high discharge, to be released throughout the summer. Nearly all of the water enters and leaves through the canals.

The Nature Conservancy works to protect land through outright purchase and also working with local landowners and communities. We visited the Consumnes Preserve, where levees have been breached in places to allow a more natural flooding cycle. Here students hear about the benefits of this program, which include groundwater recharge and increased health of out-migrating salmon smolt.