The trip began with a look at one of the most efficient...and environmentally disruptive...ways of mining. By literally peeling away the mountains of West Virginia layer by layer, coal companies can extract all the layers of coal within the mountain, including layers too thin to be mined by other techniques. Unfortunately, this process requires the bulk of the mountain to be piled elsewhere, always in an adjacent stream valley. 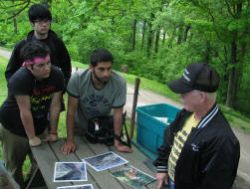 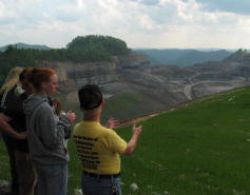 Coal washing operations create a heavy-metal-rich sludge, which is also impounded in the stream valleys. Some impoundments have failed, releasing sludge into streams and communities. The continuous blasting required to literally move mountains shakes nearby homes. If concern for global warming does not make you want to turn from coal, a visit to a mountaintop removal site just might. 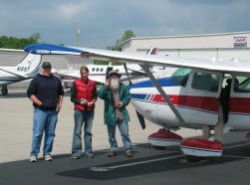 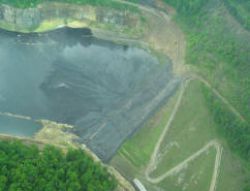 On our trip, we were taken on flights over mountaintop mines by volunteer pilots with Southwings an organization dedicated to raising awareness of environmental problems by flying people over areas affected.

The aerial view is really the only way to comprehend the magnitude of this problem. We also visited West Virginia native Larry Gibson at his historic family home on Kayford Mountain. Larry has resisted lucrative offers to sell his land to coal interests, and instead accepted the role of environmental activist that fate has forced on him. We count him among the true heroes of the environmental movement.