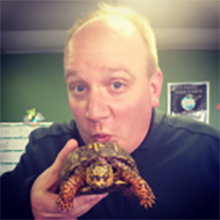 The Director of the Whitehouse Nature Center is a noted educator from Marshall Public Schools. Jason Raddatz comes to Albion College with an innovative perspective on sustainability and environmental education.

Mr. Raddatz started teaching in Boyne Falls, Michigan at the Boyne Falls Community Schools. A non-traditional teacher, Raddatz was noted for his engaging lessons involving technology and problem-solving. He was one of 10 northern Michigan educators invited to participate in a workshop hosted by Adam Savage and Jamie Heineman in 2004.

From there, Mr. Raddatz taught in Yuma, AZ as an 8th grade Science teacher. His second year, he was noted for his rigorous curriculum. Raddatz also participated in several West-Ed initiatives and helped develop the district unit for Force and Motion for ELL learners. He was named Teacher of The Year for Ron Watson Middle School, and a Quarter Finalist for Arizona Teacher of the Year.

Mr. Raddatz returned to Michigan in 2010, where he was the Science Department Head for the West Michigan Academy for Environmental Science. In his second year, Raddatz lead a team of teachers and administrators that overhauled the science curriculum to embrace technology and the use of data collection and observation from early elementary to graduation. The revised curriculum increased average ACT scores in Science by 3 points in it's first year, and was noted by administration as a major reason for the school’s first of many recognitions from US News and World Report. Raddatz's AP Biology class of 2013 was the first class that had students receive college credit in the school's history.

In 2013, Mr. Raddatz accepted the role as STEM Coordinator for Albion Public Schools. Before the absorption of the district to Marshall Public Schools, he developed a k-8 STEM and Science program that saw significant increases of Science scores of 30% in both 3rd grade and 8th grade. Raddatz also developed a popular program called STEM Geekend, which provided students from the region to engage in STEM related activities. Raddatz was named Teacher’s Teacher of the Year for 2013-2014.

After the merger with Marshall, Raddatz taught at the Marshall Opportunity High School where he revamped the building's Science curriculum. In the first year, M-STEP Science test scores for the building were the highest in five years. Raddatz has also received nearly $13,000 in grant monies in the 2018-2019 school year. Raddatz was named 2017-2018 Teacher of the Year for Marshall Public Schools and joined the Michigan Dept. of Education's Innovative Educator Corps in July 2019.

Raddatz also is an Instructor at Albion College teaching both primary and secondary Math and Science Pedagogy. Raddatz will be traveling to the UAE as part of a contingent of educators teaching STEM to Science teachers in the United Arab Emirates in the fall of 2019. Raddatz has also received several acknowledgments and awards as Marketing Coordinator for Town and Country Cedar Homes for his role in organizing home shows, pioneering the use of electronic media and website promotion. Raddatz also has experience as a Nurse, Fund Accountant, Professional Musician, and Casino Dealer.

Raddatz is married to Leigh Raddatz, CPA and has two children; Abigail (7) and Jonas (4).