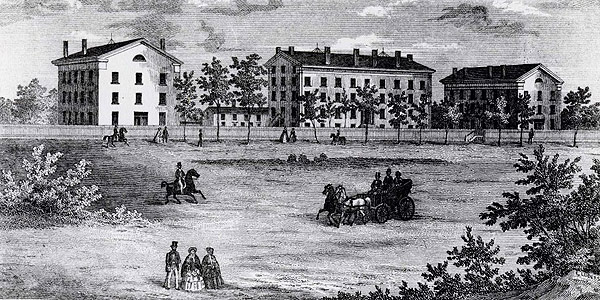 Albion College has a pioneering heritage with a work ethic to match.

Always on the leading edge, Albion became one of the first schools in the Midwest to introduce coeducation. In 1850, the legislature approved the founding of the Albion Female Collegiate Institute, which was then controlled by its counterpart, the Wesleyan Seminary Corporation. But in 1857, the two schools merged under the name of the Wesleyan Seminary and Female College at Albion. Albion College was fully authorized by the state legislature to award four-year college degrees to both men and women on February 25, 1861.

From the time the cornerstone was laid for the first permanent building in 1840 until today, Albion College has remained on the same site, the original part of which is now affectionately called "the Quad." In 1861, there were only two classroom buildings. But by 1901, Albion had added a chapel, an observatory, a gymnasium, a chemistry building, and a library.

Today, Albion stands on 225 acres with more than 30 major buildings. Since 2000, we've completed tremendous additions that range from the Ferguson Administrative Building to our LEED-certified Science Complex. The aquatic, recreation, and learning centers are complemented by our 340-acre equestrian facility and Davis Athletic Complex. In 2017, the opening of the Ludington Center officially established a College presence in downtown Albion, providing more opportunities for engagement and collaboration with the City of Albion and surrounding community.

The College's enrollment has increased from 500 students in 1901 to more than triple that number today. Full-time faculty currently totals 101, and the College has more than 23,000 living alumni.

Our growth and change are signs of our success, which we believe is founded on the things about Albion that have always remained the same. First, our emphasis on excellence in liberal arts education is our hallmark. Our commitment to a broad, rigorous foundation is complemented by our work ethic. We put students in the real world and ask them to research, participate, and lead. We expect them to do it well, to take it further, and to be more. Because Albion is where you turn thought into action. Where you learn how to live at the leading edge of who you are. Where you become your best self, ready to live a life of impact. And that's Albion College today.